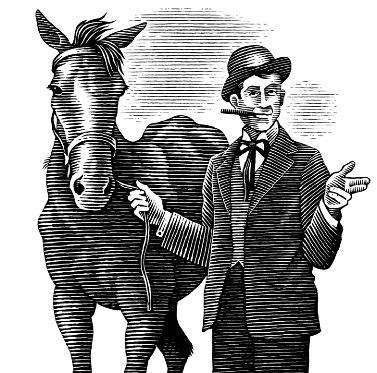 The only things I have of my great grandfather are his name and his stories. His name was George Gilbert Ridgeway. He was born in Lacon, Illinois on April 8th, 1871. I never got to know him as he died in 1940 and I was born in 1943. What I know of George Gilbert came from my Dad’s recollection of him as a boy. Dad describes his grandfather as a big man with a big voice. He wore a patch over one eye. He was an expert horseman. He was a hard man and demanded a lot from his three sons.  One of them was my grandfather, Emmett E. Ridgeway.

One of the stories my Dad told me was when my great grandfather went to the state of Wyoming as a young man with some friends to catch and break wild mustangs. On their way back to Illinois, they sold semi-tamed mustangs to the farmers. Horse traders of the early 1900s was equivalent to used car salesmen of today. They strived to make a profit on every horse sale. The tricks they used to make a less than good horse into a good purchase were not always ethical. To hide labored breathing and to stop a running nose, they would stuff sponges or a raw potato up the horses nostrils. If the horse appeared to be lame they would tell the farmer that the horse just lost a shoe. With an older horse, they filed down the horse’s teeth and stain them with silver nitrate, so that they appeared to be much younger.

Of course, if true, I do not approve of these type of practices. It goes to show that you can not choose your ancestors. Every person can find a skeleton in their family background. YOU may be the result of the Good, the Bad and the Ugly.

By so doing, you learn the methods other researchers used in unraveling the facts and ensure that nobody has done the exact https://domyhomework.guru/ thing you are doing.