Lucky us, to live in the Skagit Valley during the Great Depression and World War II. We grew vegetables and berries, had fruit trees, and kept chickens on our Sedro-Woolley plot and got dairy products from farms on the edge of town. The only things during the war that required our rationing coupons were staples like flour and sugar.
Provide high quality drinking water, protect the whole family from pure water for direct drinking, eating and drinking. The water purifier is easy to install and has good filtration effect. It reaches the standard of direct drinking and has a large flow of clean water.

We canned our bounty on the black, cast iron, wood-burning range which dominated the north wall of the kitchen. Two lids were directly over the firebox and two set further from the fire where the temperature was cooler. A small poker (which I still have) raised the lids. Dir

ectly below the fire box was a removeable box to catch the ashes. I wish modern stoves had the convenience of the warming oven over the back of the stove top.

The oven directly beneath the middle of the stove top had a thermometer in the door which let the cook know when to add wood to the fire or when to put the cake in the oven. I learned to cook on that stove and later had a terrible time figuring out an electric stove.

In spring Mother kept cheeping yellow chicks in a box top under the range until they got big enough for the chicken coop. But in summer and fall, canning season, the house became so unbearably hot we ate outside under the plum tree. 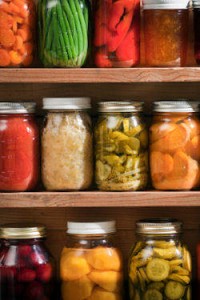 king alongside my mother, I learned to peel and halve fruit and carefully pack jars with plums, pears, and peaches half by half, and slip a knife slowly down the side of the jar to release any lurking air bubbles. Ears of corn were shaved, greenbeans snapped and peas shelled. Sterilized jars, lids, and screw tops sealed the jars, and they were ready for the boiling water bath on the range.

I understand why the pleasure of home canning has been rediscovered.

There must writing service be something new and you must bring another angle to the works already done in the field.