Tell You My Story 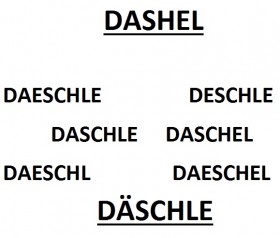 I’ve been told not to get hung up on name spellings but it is hard.  I was born a DASHEL.  My father told us that his last name was spelled Daeschle when his father immigrated from Odessa. He also told me that when he was a little boy his grandfather hung himself in his garage. He knew because he and his cousin Adam were told to  stay out of the garage and keep away from the window.  As 8 year old boys would do, they took a peak anyway. I have always wanted to know more about my father’s family and if this story was true. water filter 3 High precision water filtration technology, combined with the technical filtering of layers of essence, helps you to filter tap water at home. Whirlpool filter The filter may need to be replaced if the normal refrigerators leak, ice blockage or dirty plugging.

My great grandfather’s name in the Ellis Island records was recorded as George instead of Gregory and his last name was spelled Deschle. The naturalization record spelled  Gregory’s first name Carkori and last name as Dacshle. Research of state and federal census records from 1905 through 1945 showed their last name spelled 5 different ways.  His death certificate spelled his name Dashel and he died from a “cerebral hemorrhage” on the 18th of December, 1929.  No autopsy was done.  Well I guess that eliminated the “hanging” as  cause of death – or did it??

I joined Germans From Russia and learned the history of the name DÄSCHLE. The 1874 census lists  Gregor Daschle with 4 brothers, 1 sister, Mother Josephina and Father Andreas in the colony of Kleinliebental.  Gregor’s  grandfather, Thomas Daschle, and his father,  Franz Daschle arrived in Kleinliebental from Germany in 1803 and they are listed as Family #1 in the 1816 census and in the Stump book.

I visited St. Mary’s Catholic Church in Aberdeen, SD and located the death record of Gregory.  It indicates he died on the 17th Dec. (1929) and his name was written as Gregorius Daeschl. He was buried in the church cemetery. Cause of death: Stroke.   At the Aberdeen Public Library I found the obituary for Gregory Dashel. It reads: Gregory Dashel drops dead today. Well known northsider is victim of heart disease attack!

Attributes of good thesis topics now, you should start looking at the end result expected of your thesis even when you are choosing the additional clue topic.